Bay of Islands early
​settlement
​on the Kerikeri River. 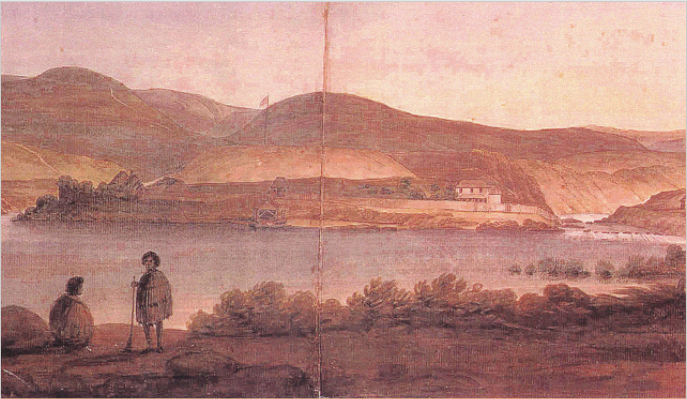 A very condensed history of Kerikeri in the Bay of Islands.

The Bay of Islands was one of the first places to be settled by Maori in around 1300, it was the first place to establish a missionary station in New Zealand and was the cradle of interaction between Maori and Europeans. 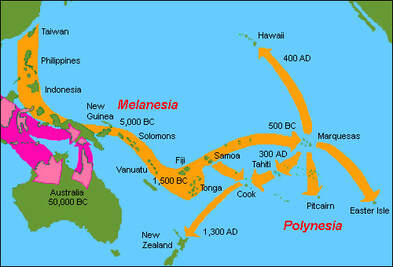 Polynesian expansion across the Pacific.

It is believed that the Polynesians originated in Taiwan and moved across the Pacific by way of the Philippines and Papua before settling the whole of the mid Pacific in a triangle stretching between Hawaii, Easter Island and New Zealand and centred mainly the Samoan Islands. Each island, of the many hundred populated, had in a different culture and dialect although clearly Polynesian.

​Polynesian expansion Map by the PNAS. Proceedings of the National Academy of Sciences of the USA.

​The Polynesian people were great navigators and boatbuilders who were capable of traveling to an island and sailing back home again repeatedly. They could do this by understanding the seasonal rotation of the stars in the heavens and the altitude of the sun through the seasons, so that each island would have a star that was immediately overhead. In its simplest explanation you could head for the star and the island would be underneath. There was also the seasonal migration of birds, fish and whales, which could be interpreted and followed. Islands have a permanent cloud overhead which could be seen from long distances and wave patterns alter as they go around an island all of which are  clues to the location of land.                ​Image. Herb Kane Heritage Trust.

Understanding all the information required for a sailing trip was immense, which is why the Polynesians were so prized as navigators and seamen on the European and American ships when they ventured into the Pacific. It is no accident that Captain Ahab, in the book Moby Dick, had a Polynesian harpoonist named Queequeg, as he would have known where the whales were and the best seasons to hunt them.
​Photo of a shell map by Jim Heaphy. California. Wikipedia. Showing the winds and ocean currents with shells representing the islands. 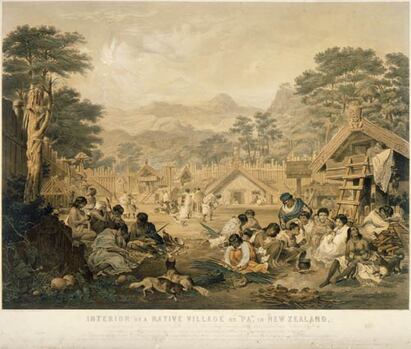 Original discovery and settlement by Polynesians.
Aotearoa, was settled by Maori around 1300, related in stories describing how the first ships arrived and settled the country. The Maori named these islands Aotearoa or Long White Cloud. When they arrived 700 years ago, they found a land thick with lush vegetation but not containing much of their traditional foods and materials such as coconut or banana, which will not grow here. They brought with them yams, taro, kumara and bottle gourd, which thrived and there was an abundance of fish and birds, but no mammals apart from seals and the Kuri dog and rats which they also brought with them.
​​Wood from the large trees and obsidian or volcanic glass proved ideal for making tools, building houses and boatbuilding. There was also an abundance of New Zealand flax which was a familiar fibre for making baskets for a variety of uses and making rope for fishing and snares. Within a short time they had a structured society supported by horticulture and fishing.
Alexander Turnbull Library ,Reference: C-029-001,  Chromolithograph by John Gilfillan
Discovery and settlement by Europeans.
​Aotearoa was later named New Zealand by Able Tasman when he visited in 1642, but it was not properly mapped until Captain Cook’s visit in 1769. 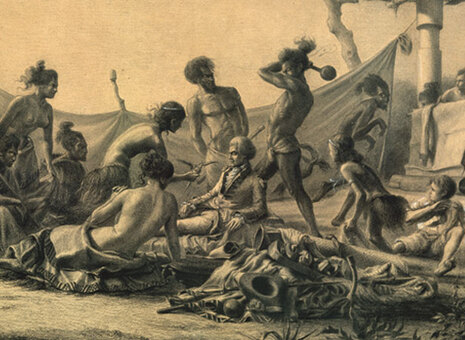 ​After Captain Cook’s first visit to New Zealand, in 1869, when the Bay of Islands was given its name, two French ships under the command of Marion de Fresne stayed in the Bay of Islands to recuperate and reprovision. During this stay misunderstandings arose resulting in skirmishes in which de Fresne and 16 French crew were killed and some were eaten. In reprisal 250 Maori were killed. The Maori had a fearsome reputation and reacted fiercely if their customs were transgressed. 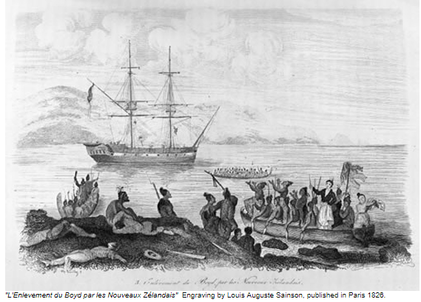 ​Despite the early difficulties it was possible to co-habit and trade so that a relationship was established. The first whaling ships arrived in 1791 and made a base for reprovisioning at Russell, which quickly became famous for grog and women and was known as the ‘Hell Hole of the Pacific’. Many Maori were taken on as crew members and navigators as they were great sailors.


The whalers and traders introduced potatoes and pigs which the Maori farmed and then exchanged for iron goods, cloth and the highly prized musket. 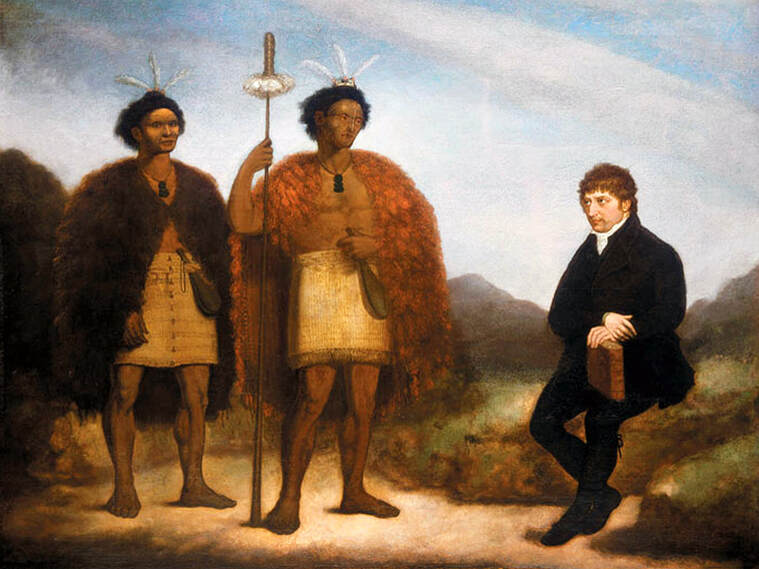 European settlement.
The Reverend Samuel Marsden visited the Bay of Islands in 1810 and started a mission at Rangihoua (Marsden cross) in 1814 and the second five years later in Kerikeri under the protection of Hongi Hika. The first missionaries at Rangihoua were the Kendalls, Hall and King families, Rev John Butler and family, superintendent, Francis Hall, teacher and James Kemp, blacksmith. The missionarys plan was to introduce farming, skills and education to improve Maori lives and convert them to the Christian way of life with strong elements of the Chartists movement, which was gathering support at the time in the UK.
By James Barry - http://www.treaty2u.govt.nz/ 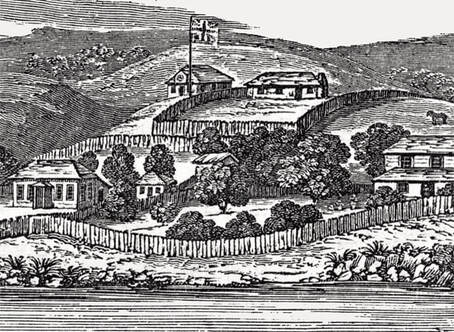 ​
The missionaries were allowed to utilise 13,000 acres of land to farm by Hongi Hika and Rewa, to induce them to stay, as Maori saw Europeans as an important source of finished goods, materials such as iron, cloth new foods and technical knowledge.  Maori land is a permanent resource and its sale was more a lease or an entitlement to occupy, rather than the European transfer of title and ownership but it was a basis for the start of a settlement and largely held despite some difficult times.
Missionary Samuel Marsden planted about a hundred grapevines of different varieties he had brought from Sydney, at the site he had chosen for a new Church Missionary Society (CMS) station at Kerikeri. He wrote in his journal on 25th September 1819, that: New Zealand promises to be very favourable to the vine, as far as I can judge at present of the nature of the soil and climate Should the vine succeed, it will prove of vast importance in this part of the globe.
Alexander Turnbull Library.PUBL 0031-30 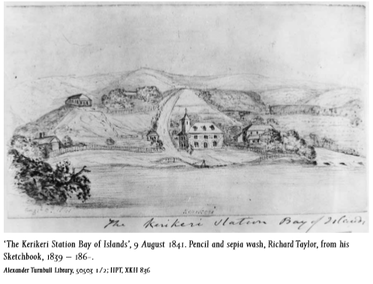 The Stone Store was built in 1832/36 to be a point of trade but already the centre of commerce was moving away to settlements with deeper water such as Paihia and Russell. With the death of Hongi in 1828, Maori were also leaving to go to areas with better farmland. with their numbers decimated by wars, influenza and smallpox.
​By 1839, the only Europeans remaining were the Kemps who remained at Kerikeri in the Mission house. 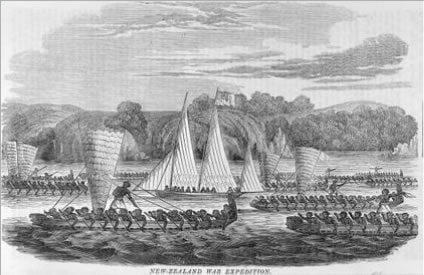 The missionaries tried to limit the sale of muskets but it proved impossible and the supply of weapons induced massive raiding parties of 2000 Maori with 1000 muskets. The musket wars were to exact revenge and gather slaves from tribes in other areas, which was common for the times. It should be remembered that slavery was not abolished in the UK until 1807 and in the USA not until 1865.
Kerikeri was not a place where Maori lived in large numbers, the Kororipo Pa was used as a meeting place and from where the raiding parties departed and returned to, with slaves and prizes of war. This whole series of events must have been horrifying for the missionaries, but they were unharmed due to the protection of Hongi Hika who they found to be an honourable and kind man.
​
'Ngāpuhi war expedition, 1820s', URL: https://nzhistory.govt.nz/media/photo/nga-puhi-war-expedition, (Ministry for Culture and Heritage), updated 23-Jun-2014 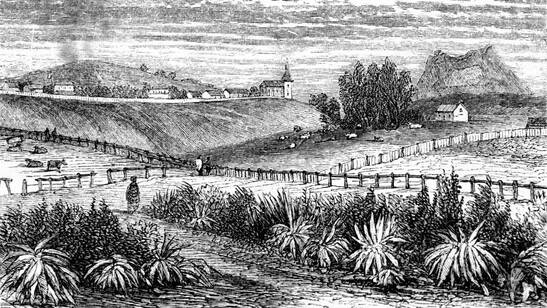 Foundations of New Zealand national Characteristics by Missionary and Chartist influence.
​Through these troubled times the mission and traders increased logging and farming to produce food and opened schools to educate the locals and the numbers grew.
The thoughts and beliefs of the early missionaries and the humanitarian movement in Britain were incorporated into the Treaty of Waitangi, which was signed between the Maori and the Queen in 1840. Chartists were also active in 1840 and their beliefs led to an egalitarian society. ​ As a result, New Zealand has a strong element of fairness for the working population,  New Zealand was the first country to limit the hours of the working week as introduced by Samuel Parnell in 1840 when he said “There are twenty-four hours per day given us; eight of these should be for work, eight for sleep, and the remaining eight for recreation…” and New Zealand was the first country in the world to give votes to women in 1893.

Modern Kerikeri.
Kerikeri remained a sleepy small settlement until the 1930’s when Mr E. S. Little came from China and bought land for citrus farming. This encouraged more farmers, especially those from China and the East Indies to settle here and we have today a huge citrus farming industry, as well as the Cathay cinema and the Pagoda Lodge, to remind us of their influence.
Note the population increase from thirty seven to six hundred and twenty three.
​
Credit. NEW ZEALAND HERALD, VOLUME LXXIV, ISSUE 22759, 19 JUNE 1937

Today Kerikeri is a vibrant, fast growing town of around 15,000 people, renowned for its sub-tropical climate with orchards, vineyards and fresh vegetables, its heritage background, the new airport and is the commercial centre of the Bay of Islands.