Kerikeri boasts three major tracks with waterfalls and a wooded trail, all within the town area. There are many more walks just a short drive away.

The long distance Te Araroa trail runs through Kerikeri across the forest to Waitangi and skirts the Bay of Islands through Paihia and Opua. There is also a trail to the historic whaling port of Russell with easy access by ferry from Paihia or Russell to the tracks on the islands in the bay.
To make a longer walking holiday you may wish to combine the Kerikeri Five Waterfalls Walks with the walking tracks at Paihia and the Bay of Islands circular walk ​http://www.boiwalkways.co.nz/   which will take you to Russell and the tracks there.  ​https://russellinfo.co.nz/walks
To aid navigation we strongly recommend the Walking Access Maps System https://www.wams.org.nz/PublicAccessAreas/ as a great resource for walkers. The maps on this website are taken from WAMS.
The Five Waterfalls Walks in Kerikeri.
Google map of wairoa river track 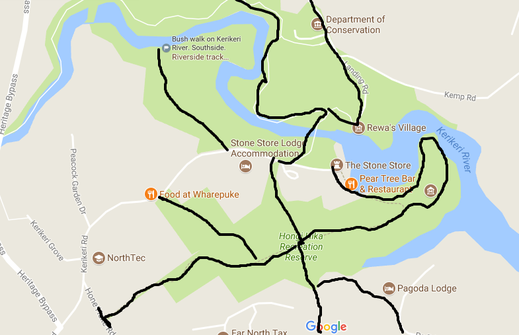 Stone Store Tracks.
​ From the Stone Store Basin car parks there is a network of short walks.
1. The Kororipo Pa track starts between the Plough and Feather gastro pub  and the river and runs up to and round the Pa.
2. Head through the car park below St James Church and up to the centre of the Hongi Hika meadow. Turn right up to the wood and continue through the trees to Hone Heke Road,
3. Head straight across the meadow to Pa Road or turn upstream to the Wairoa stream track and the big Wairere waterfall and smaller Grotto waterfall.
4. From the car park go up Kerikeri Road 75 metres to the Booth's Wharepuke reserve which is a lovely wooded walk.
5.  Walk across the river bridge to the start of Rainbow Falls track.
​The Stone Store Basin has lots of heritage value with many of the first European settlement buildings, Rewa's village and Kororipo Pā.
Have a meal or coffee at the Honey House Cafe or the Pear Tree, buy souvenirs at the Stone Store or visit the Mission House.
Wairoa River and Kerikeri River Circular Track 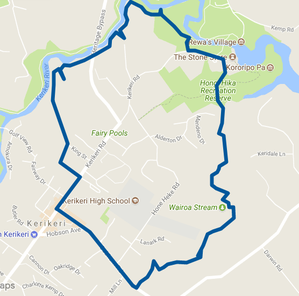 This is a 7.5 km circular route that uses the Wairoa and Kerikeri River tracks. Starting from Kerikeri centre go down Cobham Road 1km and cross the Wairoa River bridge and then turn left to go down the Wairoa river  track. At the bottom of the track turn left up through the wood to cross over the meadow to Kerikeri road by the Stone Store Basin. Walk up Kerikeri road about 150 metres and enter the wood by a small track entrance in the hedge. This track will lead you through the woods along the South side of the Kerikeri river, across the bottom on the Peacock Gardens reserve, under the bypass bridge and up through the eucalyptus wood to Kings road or Clark st which is close to the town centre.
There are many entrance and exit point along this route which are shown in the main map.
Interactive Map Button. 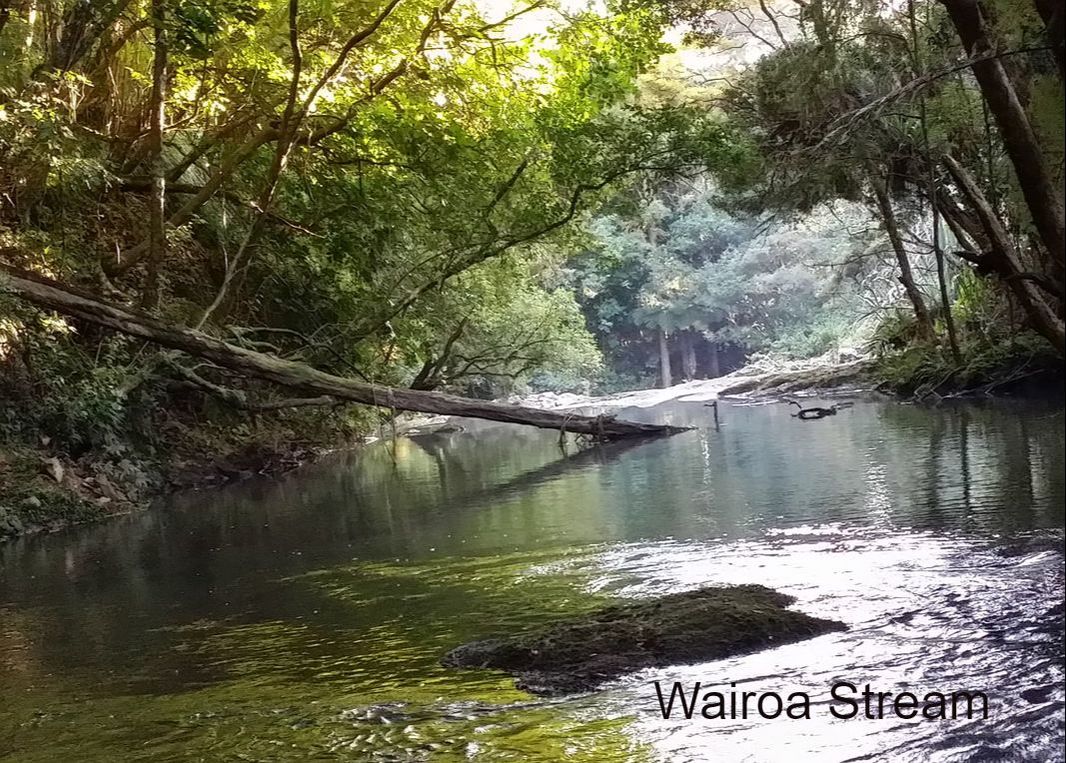 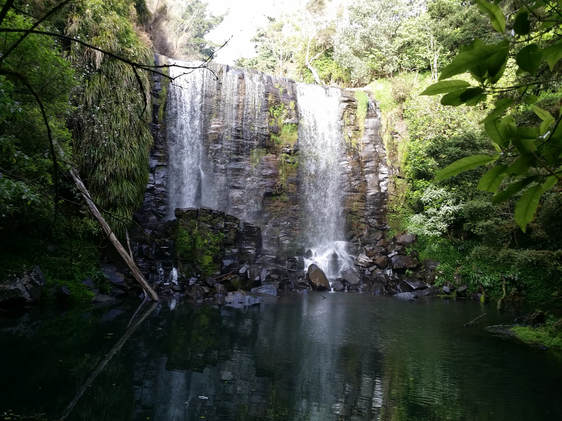 Kerikeri has secrets. Nice ones.
Kerikeri has 22 streams and rivers featuring stunning waterfalls and swimming holes.
Among them is the beautiful Wairoa Stream that  features some outstanding sites, including two waterfalls that lie between the Alderton Park development and Kerikeri Primary School.
You can do the walk as a beautiful return journey or as a loop track from the Kerikeri Basin and back again via Kerikeri Road.
Access the track by walking up and across Kororipo Pa from the Kerikeri Basin Reserve car park. Follow the DOC Te Araroa Track signs. That short track will lead you to the Pa Road footbridge but you will see signage pointing to the Te Wairere Track just before you reach bridge.
The waterfall track is well formed with several bridges and is marked with orange triangles. It is roughly a one hour return journey to this beautiful and previously ‘lost’ waterfall.
Suitable footwear is recommended as it is uneven in many places and will be slippery in damp conditions. The track should not be used when the river is in flood.
It is an easy walk that initially follows the right bank of the Wairoa Stream and then crosses to the left bank where it follows an historical path used during the 19th century. 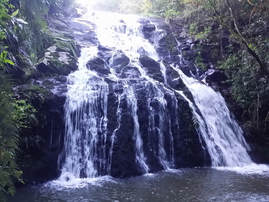 The Wairoa river bank was part of an old Maori track to Waimate North.
On May 3, 1845, it was used by a 400-strong detachment of troops under Colonel Hume to transport cannon and supplies from Onewhero Bay to Waimate North, in preparation for an attack on Hone Heke's pa at Puketutu on the banks of Lake Omapere. Thereafter the walkway fell into disuse until rediscovered by the citrus settlers who arrived in Kerikeri in the late 1920s.
Kerikeri's older land blocks are designated OLC - Old Land Claim - on the title.
This is land that was bought from Maori owners before the Treaty of Waitangi. It passed through various land claims commissions in the 19th century, and was granted a crown title. Some of these purchases remain disputed today.
Along the Wairoa Stream most of the OLC title became part of Manako Station in the late 19th century and, in the 1920s. was bought by George Alderton's North Auckland Land Development Company - NALDCO.
Subdivision of land by the company's settlement venture marked the beginnings of modern Kenikeri.
Two swimming holes were popular with the early orchard workers.
The swimming holes are mentioned in Fiona Kidman's book Mandarin Summer, a fictional account of the settlement's early scandals.
For almost 10 years until the advent of World War Two, the stream and its walkway were the town's  popular place of recreation.
The waterfall became  one of Kerikeri’s best secrets until 2017 when a new track was developed.
Walking upstream, the Wairoa Stream loop track will bring you out at Cobham Road where you turn right towards the town centre. After 100 metres turn right into Hone Heke Road and return to the Basin via the Stone Store Hill on Kerikeri Road.
Charlie's Rock waterfall and swimming hole. 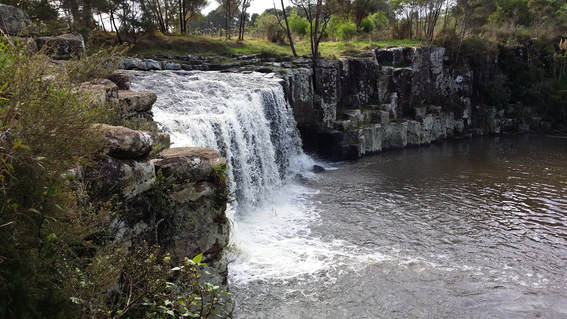 Opposite the Waipapa boat ramp​, Charlie's Rock Is one of Kerikeri's iconic natural assets.
The walk to the Waipapa Stream waterfall is not a long one, although it does require some agility. The prize at the end of it is a real gem, offering a beautiful swimming spot and basalt rock formations. Those who like a thrill, jump into a beautiful, swirling swimming hole from up high.
Beware of rocks, however, and make sure you know what is below the surface before you leap.
The track to Charlies Rock is off Landing Rd in Kerikeri.
The 15 to 20-minute walk starts near Cherry Park House, opposite the Waipapa Boat Ramp, where you can park, and follows the western boundary of the croquet club.
It then meanders along the Waipapa Stream, leading you to the waterfall. 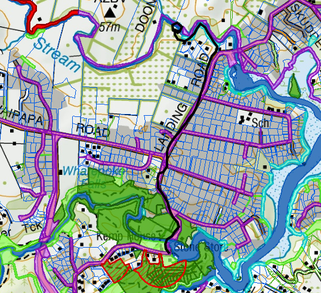 Charlie's Rock waterfall is accessible from the Stone Store Basin car parks or from the Landing Road slipway car park.
From the Stone Store Basin walk up Landing Road go over the roundabout and straight on down the road and, on the left hand side,  before the slipway there is a small track that runs down the uphill side of the croquet court.  From there it is only a short walk to Charlie's Rock waterfall although it is a bit rocky. From the slipway car park cross the road and there is a small track down the side of the croquet court. 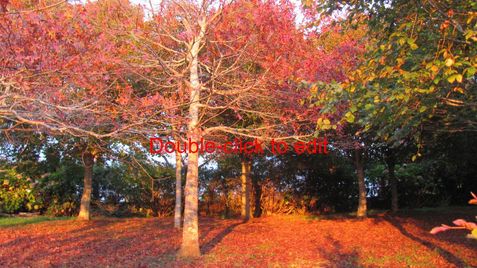 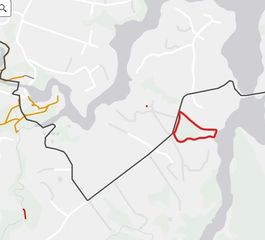 Roland’s Wood is a beautiful woodland on Inlet Road, 3 km from Kerikeri centre, where you can let your dog go off-leash, a rare treat for dog owners and their pets.
The four hectare woodland was bequeathed to the community by a man with a dream - dog lover Roland Sansom, who died in 2001.
In his will, he gifted it to the people and dogs of Kerikeri, under the care of the Far North District Council.
In the mid-1980s he had planted a wood of English trees, daffodils and blue bells. It was his dream to create something beautiful and enduring.
Roland's Wood was highlighted in an International Dendrology Society of New Zealand publication (2011), in which Gordon Collier described it as a significant planting of deciduous trees.
Roland's Wood is increasingly popular with dog owners, garden lovers, trampers, photographers, bird lovers, artists, children's groups, picnickers and tourists.
Acquisition of an adjacent block of land, known as Lavender’s Land, means the woodland will be expanded.
For more information, go to    http://rolandswood.blogspot.co.nz/p/blog-page.html 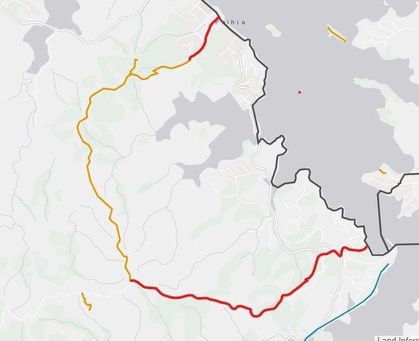 Paihia forest, Haruru Falls and Opua
Research by Keri Molloy.
​Paihia is seen as the gateway to the Bay of Islands, with a focus on the sea but what many people don't realise is that it has great land-based natural assets.
The 1932 ha Opua Conservation provides a scenic forest backdrop to Paihia. The forest has not been cleared so plants are among the wider regenerating podocarp hardwood forest. 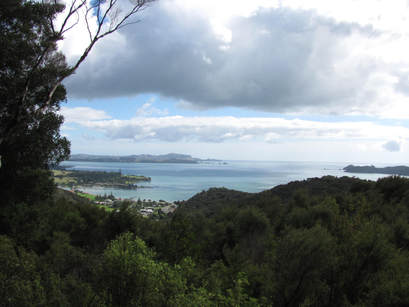 From Paihia, the Opua Forest track starts at School Rd. The 1.5km track offers a pleasant walk through wetland before heading uphill through the forest to a lookout. Here you are treated to stunning views.
This is an hour return walk on a well-maintained track.
If you want to venture further, the Paihia lookout track joins the Oromahoe Rd Traverse, an old cart track that goes right through to Oromahoe Road. We did the entire 6 km track, which takes an additional one and a half hours of steady walking, one way. The track follows a ridgeline through regenerating forest. It does not have any viewpoints but is a nice bush walk.
We left vehicles at both ends of the track.
Oromahoe Rd is narrow and winding, and parking is limited at the end of the track. We felt it would have been better to do the return walk from Paihia or turn back along the track.
No dogs are allowed because the Opua Forest is a kiwi habitat.
Other walks in the area include the Waitangi National Trust mangrove walk - also known as the Haruru Falls walk. The 6km track starts on the opposite side of the road from the Waitangi treaty grounds. There is plenty of parking and it skirts the Waitangi Golf Course and then follows the river to Haruru Falls. A feature is the boardwalk section which provides an opportunity to pass through the interior of a mature mangrove forest. The walk takes two-and-a half hours one way, and transport back will need to be organised if you are not returning by foot.
The Paihia to Opua Coastal Walkway is 5.6km and takes three hours one way. It starts at the end of Paihia Beach - tide permitting - otherwise follow the road to Te Haumi Beach, cross the bridge and it is signposted immediately after the bridge. This walk links with the Okiato to Russell Walkway for a full-day experience.
UA-109663658-1 google55aa65a8fa6a98fe.html google107c30b4d1416876.html